Voted Best Venue in the Lower Valley for 2021 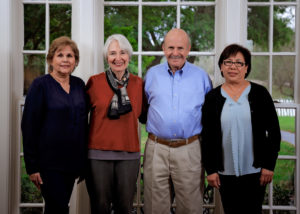 The property known as Casa Los Ebanos began as the Russell family home in 1938 and was occupied by the present owner's mother until 2000.  In January of 2002, Martha and Taylor Blanton opened the grounds to the public as a private nature preserve and bird-watching venue.  In May of that same year (and many bird-watchers later), a young woman dropped in and asked, "Could I have my wedding here?"  In the 20 years since that important question, Casa Los Ebanos has proudly hosted hundreds of beautiful weddings.

Martha and Taylor are still actively involved in the daily operation of Casa Los Ebanos and believe that much of its success is due to the initiative and hard work of Macaria Bujanos, who has been with them since the beginning.  In the fall of 2015, another cheerful face came on board, Irene Atkinson Abrego.  She too has proved to be incredibly organized and enthusiastic when working with potential brides and grooms as well as existing clients.

Please visit the Casa Los Ebanos website, and schedule your appointment to view this gorgeous property and meet its exceptional management team.