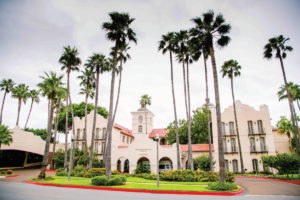 A luxurious stay fit for royalty, the magnificent site that is Casa de Palmas, Trademark Collection by Wyndham has been an attraction for hospitable service in McAllen, Texas and the Rio Grande Valley for 100 years. Seeing the city grow throughout the 20th century, Casa de Palmas is overflowing with rich history and stands proudly with welcoming arms.

After the arrival of a new railroad in 1905, the city of McAllen began to develop as farming and agriculture started to bring business to the South Texas area. When 12,000 soldiers were sent in 1916 to the border to control damage and trouble bandits had caused, a rise in business occurred to accommodate the growing population. Thus, in 1918, the Casa De Palmas was built as an homage to Spanish missions with a red-roof tile, solid bricks, and arched doorways. Over the next several decades the hotel has seen many patrons, including big names such as Bing Crosby and Bob Hope. However, in 1973, the opulent hotel was devastated by a lightning strike fire; in turn, the hotel was rebuilt in the original style and continued to serve the ever-growing Rio Grande Valley. The full-service hotel features newly renovated guest rooms, an on-site restaurant, and bar, a 24-hour state-of-the-art fitness center, a stunning courtyard pool, and up to 6,500 square feet of event space.

Once described as an elegant blend of Texas hospitality and Spanish accent, its endurance throughout McAllen’s history has proven Casa de Palmas, Trademark by Wyndham to be not only a success in our community but a place where anyone can call “home.”